My first article about Pokémon was based on my emotions, my love for the IP and some anecdotes. The upcoming posts will be an analysis of the PR Campaigns, to see what were the major differences between SuMo and XY communications.

According to the February 1st, 2017 Corporate Management Policy Briefing by Nintendo (Available in PDF, here):

“We released two completely new entries in the Pokémon series, Pokémon Sun and Pokémon Moon, worldwide in November last year, and achieved explosive sales. According to our recent analysis, the global sell-through (volume sold from retailers to consumers) has exceeded 13 million units and continues to grow” 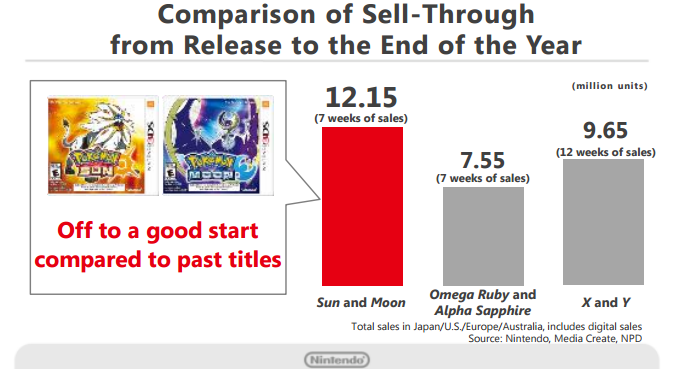 “THAT’S MASSIVE!” said Kimishima-san,  President of Nintendo (well, he didn’t say it in those words, but you got the point)

If you want even more evidence of how smashing the sales are:

(All credits go to Oscar Lemaire)

To put things in perspective (all numbers; except YW, are Worldwide):

In terms of sales, Pokémon SuMo is a monster and a behemoth in the making. There’s no doubt that the game will be the best-selling Pokéduo over the long term. There are a lot of reasons to explain this success (will give more details in later parts of the series)

Before moving to the next part of the article, let’s take a look at an interesting fact from the Corporate Management Policy Briefing:

That’s it for the first part. The next ones will be focusing on PR data, outputs, messaging and flow.